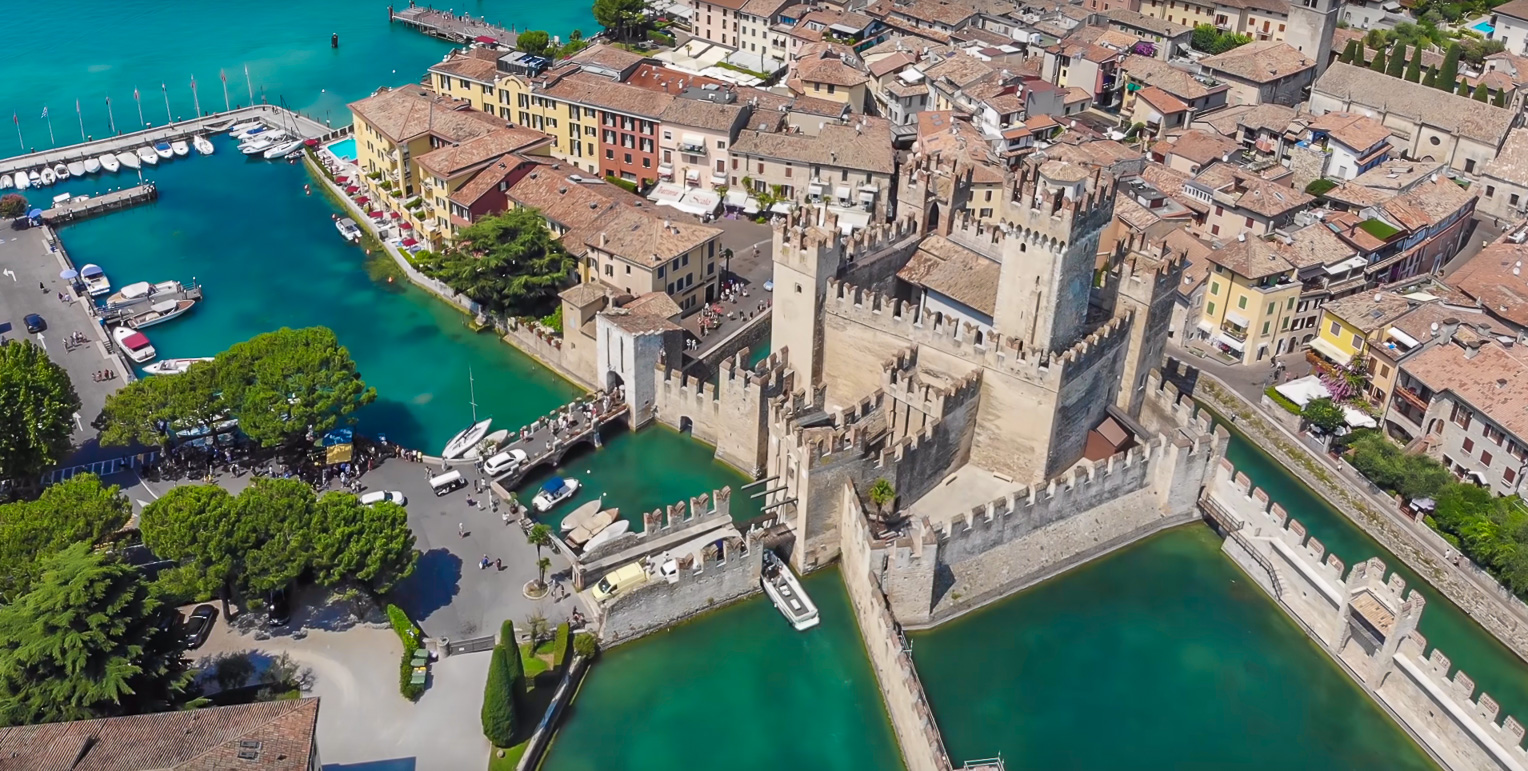 Sirmione is a town of just over 8 thousand inhabitants, located in the province of Brescia. Its historical centre rises on a peninsula that stretches out between the waters of Lake Garda and offers suggestive views in every direction. For centuries Sirmione belonged to the Veneto region, then it was moved to Lombardy and the province of Brescia by the administrative reorganization carried out by Napoleon. The main source of income of the inhabitants of the town today is represented by tourism, both for the presence of thermal waters and the numerous Roman remains. The peninsula on which the town stands stretches out among the waters of lower Lake Garda for about four kilometres, offering several kilometres of coastline and small beaches with a unique and irresistible charm. The hinterland, on the other hand, extends as far as the morainic hills that surround a large part of the southern coast of the lake basin, including the production area of Lugana.

Sirmione is certainly one of the key stops for those staying at our hotel in Lazise.

The area in which Sirmione rises was already inhabited by some groups during the Bronze Age, who chose it to take advantage of the isolation offered by the place and the ease of protection afforded by the peninsula lying on Lake Garda. Numerous remains have been found in the area, including stone and metal artifacts. Centuries later, the Romans decided to make it a place to stay. Right on the northern end of the peninsula are the ruins of a large Roman villa, later renamed the "Grotte di Catullo" (Catullus's Caves), inside which some frescoes dating back to the first and second centuries BC are still visible. Later, in 1197, the Podesta of Sirmione swore allegiance to Verona, tying the town to the Scaliger power. According to some recent studies, the Scaliger castle was completed during the lordship of Cangrande I and was built on the remains of the ancient Roman castrum, where the peninsula is narrower and reaches its smallest point. In 1405, Sirmione passed under the control of the Republic of Venice, losing importance to the nearby Peschiera. From that moment on, Sirmione became a simple military outpost, until the area was conquered by Napoleon and, after the fall of the Serenissima, under the control of the Venetian Municipality. In June 1805, after the institution of the Kingdom of Italy, a new administrative reorganization took place. Sirmione was assigned to Canton VII, which in turn was part of the district of Brescia. A very important event for the economic destiny of the town was the intubation of the thermal waters. At the end of the 19th century, in fact, the first intubation works took place. The spring was already known to all the inhabitants of the place since the sixteenth century. but the depth at which the water flowed (almost twenty meters below lake level), had always prevented its use. Thanks to this intubation system it was possible to build the first spa.

What to do in Sirmione

Near what remains of the Roman villa, a small museum displays most of the archaeological finds recovered on site, as well as some interesting reconstructions of the structure. Those who come here can't miss an in-depth visit to the crenellated walls that surround the village and, with it, the fantastic Scaliger Castle. The fortified village is the destination of a particularly crowded walk, especially on holidays and during the summer season. There is no lack of shops, haute couture boutiques and everything that may interest tourists who come to the area. Apart from the dozens of small shops which line the old town, it is also possible to find well-stocked outlets and shopping centres, as well as accommodation facilities and restaurants which are able to suit even guests' most demanding requirements. It is no coincidence that Sirmione is renowned for its extraordinary hospitality and for the abundance of entertainment opportunities with numerous clubs and panoramic terraces. There is no lack of spa facilities, which make use of the waters that rise from the bottom of the lake and that were already known in Roman times, thanks to their healing powers and their soothing and relaxing properties. The sulphurous waters of Sirmione have been used for more than a century to treat respiratory tract ailments and skin diseases. All the spa facilities in the area are particularly popular, although the favourite of tourists is Aquaria. Nowadays, pronouncing the word Sirmione means shopping, even if a visit to the village must be absolutely completed with a detour to the remains of the villa of the Latin poet Valerio Catullo, who during his stays largely praised the beauty of the local nature. If during the day it is possible to dedicate oneself to bathing and sunbathing at the various little sandy beaches