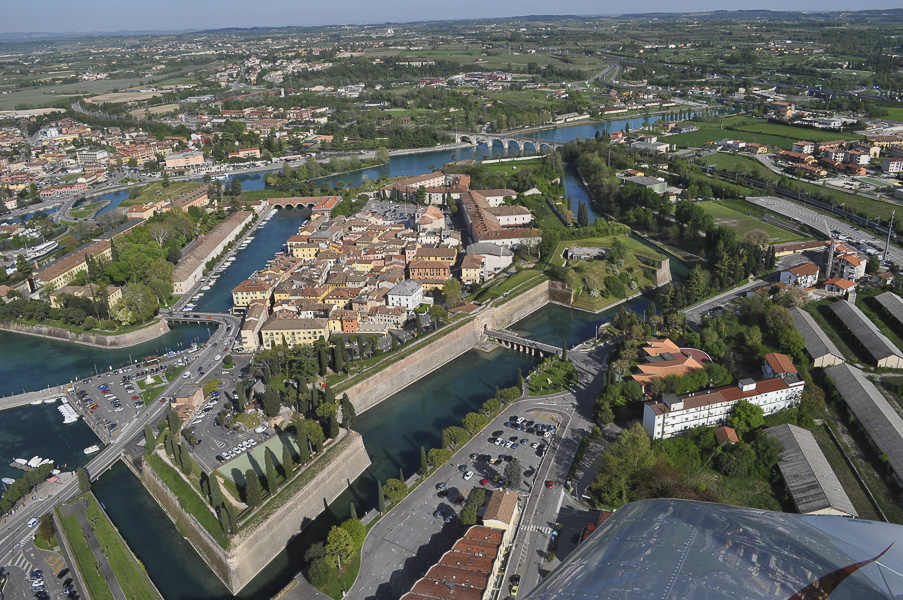 Peschiera del Garda is a town included in the province of Verona that has just over 10 thousand inhabitants. It is the westernmost town in Veneto and its territory borders the Lombard provinces of Mantua and Brescia. It rises about 9 kilometres from our hotel in Lazise and overlooks the southern shore of Lake Garda, where the main outlet of the lake basin, the Mincio, comes out. It is from Peschiera del Garda that a long cycle path of over 43 kilometres starts, which connects the village to Mantua and runs along the Mincio river for most of the route, crossing a wonderful natural environment, a destination for many tourists and cyclists.

What to do in Peschiera

In Peschiera you can try your hand at a large number of water sports, including sailing, rowing, water skiing, swimming and windsurfing. On the long cycle path that develops around the village and along the banks of the Mincio river, it is also possible to go running or cycling. For nature and water lovers there is the Cavour Water Park, one of the most beautiful and organized in Italy, while for shopping enthusiasts there is a wide selection of shops, as well as outlets and shopping malls. Obviously in Peschiera there are not only pastimes of this kind, but the architectural beauties abound, including the walls dating back to the sixteenth century of Venetian workmanship, which now houses Piazza Betteloni, a few meters from the marina. Since 2017 the walls have become part of the UNESCO World Heritage Site. Inside the adjacent square, a visit to the Military Museum located in the old building of the Presidium Command is recommended. In Piazza Ferdinando di Savoia, also known as Piazza d'Armi, there is the parish church of San Martino and the Military Prison. Finally, it should be noted that beach lovers in Peschiera can find everything they want. In fact, there are a series of pretty pebble and sandy beaches and even seaside resorts that welcome dogs, such as Braccobaldo Bau Beach.

What to see in Peschiera

The church of San Martino is one of the oldest in the village, considering that the first evidence of its presence in the village dates back to 1008. In 1145 Pope Eugenio III wrote his name inside an official bull. The present church, however, is a rebuilding from the Napoleonic era, carried out between 1820 and 1822. The frescoes inside are the work of the painter Severino Saoncella and date back to 1937. The most important and best preserved religious building in Peschiera is undoubtedly the sanctuary of the Madonna del Frassino, a church where the statue bearing the church's name, which miraculously appeared on May 11, 1510 among the branches of a tree a few meters from the structure, is venerated. The entrance to the sanctuary is located through a wide driveway bordered on both sides by two rows of cypress trees. The beautiful external façade has a portal protected by a roof resting on four small columns that originate three arches with cross vaults. The rose window with polychrome glass is also interesting. The interior of the church has a single nave and ten side chapels, two of which are larger, the one dedicated to St. Francis of Assisi and the one dedicated to the Madonna del Frassino. On the right side of the church stands a small cemetery area reserved for Franciscan monks, as well as the space where the miracle originated, located near the corridor leading to the frescoed cloisters. The paintings here were made in 1653 by Muttoni and depict scenes from the life of St. Anthony of Padua and St. Francis of Assisi: inside the cloisters there are also more recent paintings, dating back to the 19th century and attributed to Salesio Pegrassi, which tell the story of the sanctuary and the myth of its origins.

A few minutes from Peschiera there are many picturesque villages, all perfect for a day visit, including Solferino, Borghetto and the Tower of San Martino.