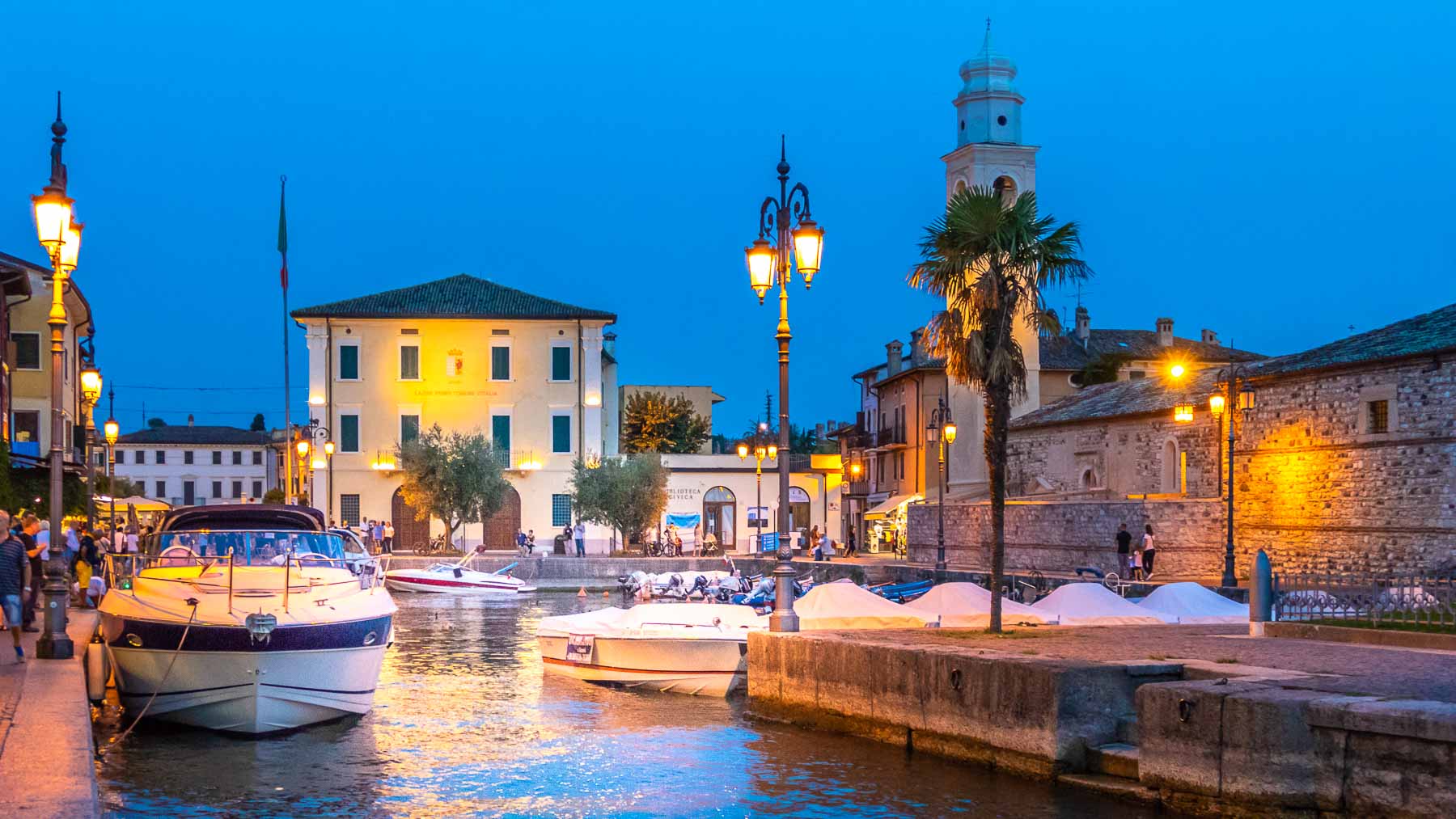 Located on the eastern shores of Lake Garda, Lazise is a small town with just under seven thousand residents, founded in the far prehistoric era, which later became a center of European interest in Roman times. The name of this Venetian municipality derives from the Latin word “lacus” translated into “lake village”, which perfectly describes its position. The name has not changed over time, as evidenced by some documents dating back to the early Middle Ages that mention Laceses.

Lazise: from prehistory to the present

The first findings indicate the birth of Lazise to be in the Bronze Age thanks to some prehistoric pile dwellings found in the territory. Over the centuries the city has developed considerably so much that in Roman times it became the crossroads of goods coming from Germany. Just like in the rest of the towns of the Lake Garda area, various groups of the population dominated in Lazise, such as Ostrogoths and Longobard. Unfortunately, the information on the origins of these groups is fragmentary, and the only evidence of that period refers to the count of Verona.

In the far 983, the community received the approval of the emperor of the Holy Roman Empire, Otto II who granted the rights of transit and fishing, and to fortify the castrum. This exception made Lazise the first free Italian municipality.

Over the years, Lazise has always remained faithful to Verona, and though there have been several dominations, it has always kept the privileges that the Emperor granted it. This town was the territory of a passage of many armies and battles for the settlement of the city.

After the French revolution and the three Italian wars of independence, Lazise didn’t join the Kingdom of Italy until 1866.

Thanks to the various population groups dominating over the centuries, the Lazise area has a variety of places of interest and religious monuments you cannot miss. There are multiple churches in the municipality dating back several centuries, where you can admire the architecture of the time and the influence of different styles on the decor.

The church of San Nicolò is one of the most famous and appreciated. Located in the old port, it is romantic in style, probably dating back to the 12th century. The date isn’t certain since the first documentary evidence appeared only in 1320. The porch on the main door is original, one of the oldest pieces of the church. Over the years, some pieces have been redone, like the apsis in 1595 and the unfortunately unsafe bell tower demolished towards the end of the eighteenth century and redone again.

Another monument of religious interest is the church of SS. Zenone and Martino. San Zeno is the protector of water and fishing, so the Holy Spirit has a great presence in this municipality. The church dedicated to him was built in 1200 but demolished and rebuilt in the eighteenth century by Luigi Trezza. Although it is built on the same location as the demolished monument, it is disproportionate in size and shape.

There is so much to see in Lazise! Dedicating a day to the places of interest is easy given the richness of the territory. The Venetian Customs is the evidence of trade at the time of Venetian control over the territory. It was the meeting point between the imported and exported goods. It went through everything, from cotton to gunpowder. Today, it’s home to exhibitions and events. After the restoration in 1973, everything remained the same.

One of the most admired and visited buildings is the Scaliger Castle. Built by the Scaglieri to protect themselves from the invasion of Hungarians, today, it is one of the best preserved Garda castles. Built before the year 1000, it was fortified and remodeled over the years. It has a square plan, five towers, and a fortress. The Scaglieri family crests are present at the two entrances. They were made to be carved directly by Emperor Maximilian to delight the locals.

Among the many villas in the Garda municipality, Villa Pergolana is one of the most beautiful. Born in the sixteenth century as a monastery of Franciscan monks, it has undergone several changes over time by those who resided there. The monks also built the church of Santa Maria delle Grazie. In 1574, they sold everything to the counts Della Torre, who in turn ceded the monastery and the church to the Villa that decorated the church with other paintings and new furniture. The properties were sold over and over until the arriving in 1856 of the Counts Cavazzocca Mazzantini. In 1630, unfortunately, the church was plundered, and in 1744, the monastery was damaged by the passage of foreign troops. Thus, on the site of the church and the monastery, the modern Lombard-style villa was constructed in the form of a castle surrounded by a garden that reaches the shores of the lake.

What to do in Lazise?

Besides the opportunity to visit the historic center, churches, and monuments of interest, Lazise is a city rich in entertainment and activities of all kinds. Beach life and water sports are surely one of the main attractions. The beautiful lake promenade resembles Piazza San Marco in Venice. Here you can stay at one of the numerous bars and restaurants and observe the lake. The historic center is full of shops overlooking the alleys that are called “Calle”.

Throughout the year, the town holds multiple events. The Bisse regatta is between July and August. It is a race with classic Venetian rowing boats. The festival of the Madonna della Neve at the beginning of August in Colà is one of the oldest festivals, where you can try the traditional dish, stuffed roast duck. On Shrove Tuesday and Ash Wednesday the Sagra del Marciapié is held. And on November 11th, the patron saint San Martino is celebrated, a feast where you can taste the traditional local dishes in the streets of the town. But there are multiple other festivals such as Santa Lucia, the national fair, the days of honey, the carnage of Cadenon and the feast of the guest.