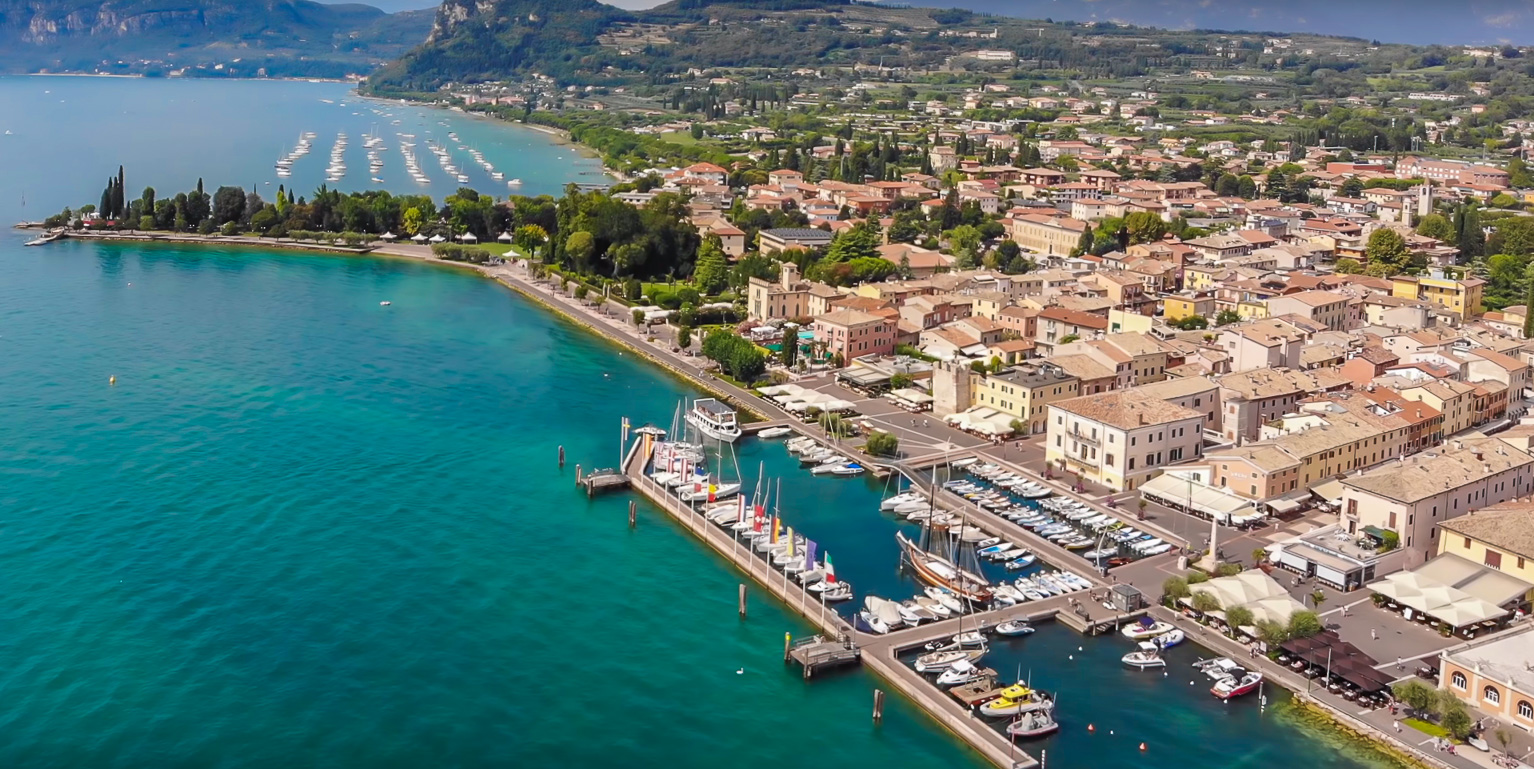 A few kilometers from our hotel, right on the shores of Lake Garda is Bardolino, a town in Veneto with seven thousand inhabitants. The vastness of the territory in which the municipality is included makes this town a destination suitable for all kinds of holidays. The hypotheses on the origins of the name are varied. One of the most concrete is that the name Bardolino derives from a Latin word of Gaelic derivation "Bardus" which means "cantor". Other hypotheses instead see the word as a Germanic derivation of Pardali or Bardali, the daughter of King Aulete who founded Mantua.

Bardolino: from prehistory to today

As for almost all the towns on Lake Garda, Bardolino too has prehistoric origins. The most ancient testimonies date back to the distant third millennium before Christ, when the first civilizations chose to live in this area by building stilts on the shores of the lake. In particular, pile-dwellings have been found in the hamlet of Cisano.
With the passing of the centuries, Bardolino was also one of the favourite lakeside towns of the Romans, the remains found from the 2nd century B.C. testify to this love for the town. Today the finds, in particular the inscriptions on stone found, are all collected at the Maffeian Lapidary Museum in Verona.
After the fall of the Roman Empire, the inhabitants suffered the invasions of the Barbarians followed by a relatively short period of peace, since with the Gothic war, the Goths and Byzantines attacked the city for a long time. In 568 the Longobards also made their appearance, imposing their dominion over the whole lake. They were a breath of fresh air for the territory, as they favoured the expansion of trade, agriculture and also culture. Their dominion continued until 774 when Charlemagne's Frankish army defeated them. In 807 the name Bardolino appeared for the first time on a diploma that sanctioned the passage of the Abbey of San Zeno to Verona.
As for all the cities on the shores of the lake, also here around the ninth century the town erected walls and castles to defend itself from raids. Like Lazise in 1100 it too became an autonomous municipality.
It reached its most lustreous destiny under the dominion of the Serenissima Republic of Venice, where trade intensified and it became a Venetian navy on the lake. From 1798 Bardolino passed first to Austria and then under the reign of Napoleon. In 1848 the city rebelled against the Austrians and in 1866 it also became the Kingdom of Italy.

Religious monuments not to be missed in Bardolino

The church of San Zeno is one of the most beautiful examples of Carolingian architecture in the area. Dating back to the middle of the 9th century, it has a Latin cross plan and barrel vaults on the two side arms and cross vaults in the tiburium. It is precisely on the two side arms that the original decorations of inestimable value are preserved. The peculiarity of this church is that it is one of the few churches in the territory of Verona to have survived the earthquake of 1117 intact. It is considered one of the most important examples of Carolingian origin throughout Italy.
In Romantic style, built between the 11th and 12th centuries, there is the church of San Severo. It contains frescoes from the 12th, 13th and 14th centuries. But the original nucleus of the church is even older, dating back to 893.
Not to be missed are the Monastery of San Colombano, the parish church of Santa Maria, the small church of San Vito, the church of San Nicolò and San Zeno.

The castle and the surrounding walls are one of the most interesting places. The first castle here in Bardolino was built towards the end of the ninth century, when King Berengario allowed the inhabitants to build fortresses to defend themselves against invasions. Over the centuries the original walls were continuously modified to meet different needs. In the State Archives of Venice there is a map dating back to 1439 which already shows the local topography where the walls delimit the area with four towers on the sides and two gates to the city, one looking towards Garda and the other towards Verona.
Inside the walls we find the historical centre. Here the houses were inhabited and built by the fishermen who built them in a fishbone shape, one behind the other starting from the first house on the lake beach. The streets were also built to facilitate the transport of boats in front of each house, which is why they are perpendicular to the lakefront. It is the combination of all the typical features of Bardolino that make the old town the main meeting place for tourists who choose this destination to spend their holidays.

What to do in Bardolino?
The beautiful beaches of Bardolino on Lake Garda are the most popular. Water sports can be practiced almost all year round thanks to the mild climate. There are plenty of bars and restaurants along the shores of the lake where you can enjoy the typical cuisine with freshwater fish dishes. Oil and wine are also the protagonists of the local cuisine. In Cisano you can visit the Olive Oil Museum. To buy local products there is a beautiful weekly market that takes place on Thursdays from early morning until noon. Here the different growers meet and offer only local food.
There is no lack of discos and nightclubs for the younger ones, especially during the summer season, when the heat attracts tourists from all over the world.
The most eagerly awaited events of the year are the Bisse regatta, the national piano competition "Città di Bardolino", the Chiaretto festival in May, the grape festival in October, the Novello festival in November and the Campania festival in Cisano in spring, the historic "Osei" festival at the beginning of September.